AfroAsiatic Perspectives #7: You cannot Shake Hands with a Clenched Fist! 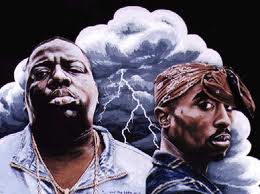 Back in 1997, the Notorious B.I.G. was gunned down in Los Angeles, California less than a year after rival Tupac Amaru Shakur was slain in Las Vegas. This seemingly put an end to the recent “East Coast vs.West Coast” duel that had been fueling in the hip hop community over the past couple of years.

It was still almost a decade before Nas would release his controversial album, “Hip Hop is Dead”.  But for me, at that time the hijack of Hip Hop was complete. Jay-Z and Eminem took over and I bounced to Japan…

In the early 90s before these tragic events unfolded, I was a NYC Hiphop head to the core. In the daytime, I assumed the mild mannered role of a social worker / youth advocate in the ‘hood but at night-time, and into the wee hours of the morning, I stepped onto the club scene.

At that time, many clubs in Manhattan still had some of that “Tru-Skool flava”.  Even back then, there were already many “converts” to hip hop from other genres.  So, the idea was to avoid them.

If you knew where to go (on the right night) some of that original vibe would manifest itself.

I remember joints like “Buddah Bar”, “Don-Hills”, and “Soul Kitchen”.  These were the type of places you didn’t have to drink nor puff and still would hit “your groove” all the same because the venue vibrated on a higher level.

The clique that I ran with considered themselves to be “club pros”.

We rarely went “clubbin” on Saturday night. Saturday was dubbed as “amateur night”.  This was the night for the “9 – 5”, run-of-the-mill suckers to go out, get drunk and pick a fight…with anyone they caught their girlfriends checking out.

Sunday to Thursday.  These were our nights to hit the club and congregate with “the folkz”.

After the assassinations of Tupac and Biggie, something changed. An unseen energy force compelled me to pack up and re-locate in the Far East. Being a melanin-rich man bearing Japanese heritage, Nippon represented a sort of pilgrimage to my ancestors.

My migration to Japan was the segway to commence a spiritual / academic journey.

Now, I live way out in a very mountainous region of Japan. Rice fields, old temples, trees and birds appear to outnumber the quiet farmers on any given afternoon.

Culture that is being forgotten

There are no Europeans.

When I left the US, one of my priorities was to distance myself from white people and western society.  This was not due to any hatred of “white devils”, but rather, it was about understanding “the matrix”.

It was about stepping back and taking a deep breath.  The western paradigm had become more than I could bear.

Although Japan does not exceed the “long arm of white supremacy”, the discrimination policy is quite different.

Some may disagree with this assessment.  But, consider that this may be the first time for many of them to face open discrimination…as the victims.

Back in ’98, I lived in a small town called Hamamatsu City. Hamamatsu has the largest percentage of “foreigners” per-capita in Japan. These “non-Japanese” people were mainly from Brazil, Peru, the Philippines, China and Korea. Since they were not English speakers, it was cool living there.

I communicated in Spanish until my Japanese level improved.

I was determined to shed all things that reminded me of western culture, so one of the first things that had to go was handshakes.

With anyone, but especially any white people.

My new mindset also encompassed a desire to respect and practice Japanese culture…my culture.  Everyone around me suddenly became uncomfortable; especially those who categorized themselves as “white”.  It seemed that this simple digression from “normal” customs completely threw them off balance.  They seemed clueless just because I wouldn’t say “hi”.

Bowing seemed to position us on equal terms, somehow.  For whatever reason, it made them very nervous and defensive.

Why are people insulted if an original person does not wish to participate in western culture?

It has been said that the “handshake is an expression of equality”.  But like much of the west’s assault on critical thinking, this information also appears to be suspect and needs to undergo a dis-information check.

As we approach the “cold & flu” season, there is no better time to take a closer look at this foundation ritual of western civilization:

“A handshake is a short ritual in which two people grasp one of each other’s opposite hands and, in most cases, is accompanied by a brief up and down movement of the grasped hands.” ~Wikipedia

This definition, plus a little historical fact, mixed together with some logic produces a very interesting story.

Handshakes are more than just a social custom.  They are rituals.

Social rituals have been used to create a sense of group identity for thousands of years. Rituals are symbolic in nature and are usually dictated by either the religion or culture of a particular community. Their most basic social function is to express, fix and reinforce the shared values and beliefs of a society.

Does this social ritual empower YOU?

So, who’s society’s beliefs and values are we expressing, fixing and reinforcing when we shake hands?

In western psychology, the term “ritual” also represents a mental mechanism that incorporates repetitive behavior to systematically assist a person to neutralize or prevent anxiety.  Anxiety is a symptom of  an obsessive-compulsive disorder.

Is this why Caucasians become so upset?

Just a shallow reflection quickly illustrates that shaking hands might not be the most hygiene promoting custom. For example, how many men routinely leave public restrooms without washing their hands?

Considering the wide range of alternatives, how did the handshake come to be the standard greeting in this society?

A study carried out by Professor Sally Bloomfield from the London School of Hygiene concluded that people who greet each other with handshakes are very likely to pass on germs such as flu, cold and stomach bugs.

“The hands are critical in the chain of infection as they transmit infections from surfaces to people and between people,” ~Prof Bloomfield

“The Europeans were able to conquer America not because of their military genius, or their religious motivation, or their ambition, or their greed. They conquered it by waging unpremeditated, biological warfare.” ~Howard Simpson

Most people have heard stories about European soldiers who intentionally passed out blankets infected with small pox to original people. But Howard Simpson, in his quote, specifically refers to “unpremeditated” biological warfare.

James W. Loewen, author of “Lies my Teacher told Me”, writes that 3 short years after the Europeans invaded the New England area, over 90 percent of the original population was wiped out by a combination of the bubonic plague, viral hepatitis, small pox, chicken pox, and influenza.

How does this relate to the ritual of handshakes?

In every scene by western artists depicting an initial meeting between “settlers” and “indians” or any original people around the world, some supposedly “great” European man is shaking hands with a scantily dressed “native”.

The scenes that follow this are always that of illness, death, slavery, rape and the plundering of resources.

It would seem natural for us to have an aversion to shaking hands.  Why have original people accepted this western ritual without so much as a passing thought?

Psychologically speaking, this is not logical.

Is this is the same kind of “ill-logic” that has led to the acceptance of a dead man nailed to a cross?

“Show me a place where the white Jesus and the cross is accepted by the people, and I will show you a story of rape, bloodshed, theft and murder” ~Dr. Ashra Kwesi

This is not about any boycott to stop shaking hands.  This is just another invitation to think “outside of the box”.  Who taught us to think, believe and feel as we do?  Are we out of our minds?

More importantly, who is in our minds?

Stay tuned for the 8th Edition of AfroAsiatic Perspectives…peace!

LIES MY TEACHER TOLD ME: Everything Your American History Textbook Got Wrong: by James W. Loewen

The title is a quote by Indira Gandhi, former-prime minister of the Republic of India

3 Responses to AfroAsiatic Perspectives #7: You cannot Shake Hands with a Clenched Fist!