AfroAsiatic Perspectives #8: Holidays or Hell-i-daze? The Season to be Jolly has begun… 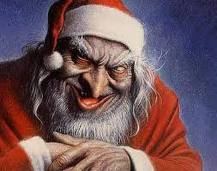 Welcome to the "Hell-i-day Season!"

“I beg to dream and differ from the hollow lies. This is the dawning of the rest of our lives. On Holiday…”     ~ Lyrics from “Holiday”; by Green Day

A melancholy chill accompanied by a myriad of beautiful earth colours cascading through the air in the form of leaves is the archetype for the profound elegance of a typical, breezy autumn afternoon.

The stage for the portal

For the past several hundred years, fall has also been the time of the year to participate in the opening ceremony for a series of rituals. It has been said that these rituals, known as holidays or the “holiday season”, serve a dual purpose.

First, to distract the masses with mythological deceptions about everything from “great” explorers to animated stories about goblins, jack-o-lanterns, turkeys, flying reindeer, elves and…finally culminating and sputtering out at the onset of the new year, which is situated in the middle of the cold, harsh winter.

The second purpose is to foment spiritual energy into this illusion called “western civilization”. This is done by persuading the masses of melanin-rich people to take part in all types of activities such as going “trick or treating”, eating turkey for Thanksgiving dinner, or even so-called “Christmas shopping”.

Participation by original people in each of these rites is critical for the maintenance of this beast called capitalism and the maze of a matrix called “modern society”.

These holidays and their customs may even go deeper than just the physical or mental levels. Is it possible that many people are unwitting volunteers in idolatrous, pagan worship practices?

What is the real meaning?

Even if these very same customs are against biblical teachings?

Thus saith the LORD… Learn not the way of the heathen, and be not dismayed at the signs of heaven; for the heathen are dismayed at them. 3* For the customs of the people are vain: for one cutteth a tree out of the forest, the work of the hands of the workman, with the axe. 4* They deck it with silver and with gold; they fasten it with nails and with hammers, that it move not. ~ Jeremiah 10:2 – 10:4

What are the origins of these days?

Even Jehovah’s Witnesses refuse to celebrate holidays such as Christmas, Halloween, and Easter which they consider “pagan”.  They also reject the “national” variety because they say in recognizing them people are giving honour to man’s government and not the Kingdom of God.

Despite indisputable evidence that many of these celebrations represent racism or other forms of outdated thinking, abolishing or changing the themes of these yearly observances seems to be sluggish, if at all in their realization.

In the “Information Age”, the fact that we are still entertaining this topic, or similarly narrow minded discussions, for example, whether professional sport mascots depicting buffoonish (Cleveland) indians or (Wash DC) “redskins” are okay or not, is all we need to know about “modern” society.

In order to gain a better understanding, perhaps we should take a closer look the opening ritual of the holiday season.

“There was no man named Christopher Columbus. His last name was ‘Colon’ (or Cologne). Columbus was the name of the operation…not the man.” ~ Aseer Ali Cordoba

The distorted myth of “Christopher Columbus”, or this name even being mentioned in the same sentence with words like “great” or “humane” have been exposed as false by everyone from great scholars like Dr. Ivan Van Sertima all the way to your neighborhood “youtube historian.” More young people than ever before are now aware of Cris Colon’s direct link to the massacres of entire cultures of melanin-rich people.

Why not celebrate "Hitler Day"?

This man and his efforts led to genocidal epochs for original people all over the globe.

“In fourteen hundred and ninety-three, Columbus stole all he could see.” ~Traditional verse, updated

Despite what appears to be the majority of people calling for the abolishment of October 12th being celebrated for a criminal, aside from a few demonstration marches, very little seems to be happening.

Is it possible that October 12th and/or the celebration of this man represents more than the mainstream account tells us?

Like Christ, the “Columbus personality” was so significant that historians use it to divide the past into eras, designating the Americas before 1492 as “pre-Columbian.”

Aseer Ali Cordoba teaches that “Columbus” was the name of the operation launched after the last remnants of the Moorish Empire were defeated in Cordoba, Spain.  He emphasizes the fact that it has little to do with any pirate named, “Cristobal Colon”.

Up until that point, Caucasians had been restricted within the confines of Western Asia (Europe). The Columbian Age marked Europeans initial entry onto the world stage. Bro. Aseer goes on to reveal the two main objectives of this operation:

First, to “line up our perception with a false time reference (western calendar). By doing so, this grants “temporal power” to the people who are promoting this false sense of time / reality”

This “temporal power” refers to the two temporal lobes, one on each side of the brain. These lobes allow a person to sort new information received from the nervous system. The left lobe is responsible for memory processes involving words, names and other types of verbal information.

The second objective was to perpetuate a false agenda about a people who, for lack of a better phrase…don’t really exist. This was / is being done by removing original people from the lands of their ancestors and staking false claims to those very lands.

Whether Africa or the Americas...it's the same sad story

There are many examples of this type of land theft world-wide.  But, perhaps there is no greater illustration of this today than the fact that the overwhelming majority of so-called “African-Americans” have been led to believe that all “Black” people are direct descendants of the continent called Africa. This, despite many historical documents indicating a totally different scenario.

“What we committed in the Indies stands out among the most unpardonable offenses ever committed against God and mankind and this trade (Indian slave-trade) as one of the most unjust, evil, and cruel among them.” ~Bartolome de las Casas

We need to re-think our priorities during this holiday season:

Who do we identify with…the oppressor of people? Or, us?  Do our customs, actions, and rituals reflect that?

Do we know who our ancestors are? Do you know who you are?

Stay tuned for the 9th Edition of AfroAsiatic Perspectives…Salaam!

Book: The Wars in Barbary, Arab Piracy & the Birth of the US Navy: by Donald Barr Chidsey

Book: Lies My Teacher Told Me; by James W. Loewen

Takuan Amaru is an author, teacher, and public speaker. Former columnist of the Examiner (Philadelphia) magazine, he has written over 100 articles on various topics such as popular culture/music, ancient spirituality, and philosophy. Tak borrows from diverse life-experiences as a soldier, social worker, athlete, as well as music artist to connect with readers. He makes his home in Nagoya, Japan. Contact: takuanamaru@gmail.com or connect on Facebook. Websites: www.gaikokujin-thestory.com / www.afroasiatic.jp.
View all posts by Takuan Amaru →
This entry was posted in Uncategorized and tagged AfroAsiatic Perspectives, Aseer the Duke of Tiers, Christmas, Christopher Columbus, Halloween, holidays, James Loewen, Takuan Amaru, Thanksgiving, The Moorish Empire, turkey. Bookmark the permalink.

2 Responses to AfroAsiatic Perspectives #8: Holidays or Hell-i-daze? The Season to be Jolly has begun…